For the fresh water aquarists the Zebra Danio has been a long time favorite for them may for the fact that it can easily be reared in groups in the same tank. It gets the Zebra name owing to its characteristic bright blue or purple lines that run parallel from the head to the tail on its body.

It is also scientifically referred to as the Brachydanio Rerio, the other names include; zebrafish, striped danio, and zebra fish. It is relatively peaceful and will live harmoniously with other peaceful fish species that are of body sizes similar to it. It is a schooling fish that has a small body which usually reaches a maximum of 2 and quarter inches. It is actually one of the first tropical fish varieties that were kept in aquariums and it has remained a favorite of select hobbyists and aquarium enthusiasts alike.

The fish is affordable and thus a perfect choice for beginners and even advanced aquarists. They are hardy and will easily adjust to varied types of habitats without much of a hustle. The females are excellent layers and will lay so many eggs and if you are in the hunt for perfect layers, the Zebra Danio will perfect for you. 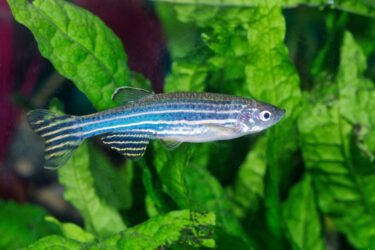 The fish are so easy to recognize due to their characteristic and attractive zebra like appearance. They have black and white stripes patterns that adorn their bodies in such an attractive manner making it a favorite for display aquariums.

As for the body size, the zebra danio has got a slender but compressed body with a barbel at every end of their lips. The fish have small bodies with the maximum body size reaching just 7cm in length (2 and a quarter inches) while in the aquarium. They can grow slightly larger if they are left in the pond or in their natural habitats.

This fish species are originally native to the Asian continent and they countries they are said to have originated from in Asia being; Pakistan, India and even Myanmar. In India, they are said to occur naturally in the Kosi River in Uttar Pradesh. There are also some few numbers of the fish in Nepal, Bangladesh and Bhutan.

It is a fresh water fish species that is known to inhabit the lower reaches of streams, rivers, ponds and even ditches. The fish keeps changing its habitat as per the seasons and times of the year. There are times you will find adult Zebra Danio occupying seasonal pools or rice paddies especially during the wet season. During this time they easily spawn and feed extensively so that their numbers greatly multiply. In fact, the zebra danio are said to be so invasive so that their numbers are considered safe. The fish prefers living in natural habitats that is heavily vegetated and silty with still waters that are not violent.

The fish are a schooling fish species that will easily adapt to a variety of water conditions they are not used to in the wild. While in the aquarium, they like to spend much of their time either in the top or middle parts of the aquarium. Even though most waters that the Zebra Danio inhabit in the wild are generally acidic in nature, the current stock available for hobbyists have been kept in fairly acidic waters. This therefore requires you to be more mindful of the pH of the tank and not let it to be too acidic.

Let us have a quick glance at the basic tank requirements for the fish:

The fish are omnivorous and will feed on small insects, worms, small crustaceans and larvae like mosquito larvae in their wild habitat. When keeping the fish in the aquarium ensure that you feed them on the above named foods but maintain the aquarium cleanliness. Remove food substrates that the fish have fed on and left as these may serve a source for infection for the fish.

Feeding them several times a day will do them justice as they are excellent feeders who will stop at nothing until they get full. Just ensure that you feed them for at least three minutes each session. You can as well offer them fish flake food or even pellet/tablets.

The females of the Zebra Danio are generally brighter in color while the males are better streamlined and thin in shape. This makes identification of the sexes quite easy. Breeding of the fish is quite easy and in some instances they may just breed in the tank alone with even your involvement.

Two different sexes of the fish are known to form a breeding pair with the male known to remain attached to a particular female! With good and favorable conditions for mating, the female fish will release her eggs in the water and the male will fertilize them. Once fertilized, he eggs will then sink to lower parts of the aquarium where they will hatch after approximately seven days.