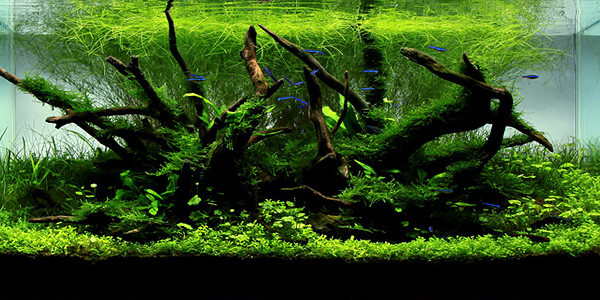 Nature style aquascaping is largely considered to be one of the most popular aquascape design styles today.

First introduced by Takashi Amano, the nature aquarium embodies many of the same core principles as Japanese gardening techniques.

The primary aim when crafting an aquascape in this style is to imitate a natural landscape as closely as possible.

From mountain ranges to submerged driftwood, this design has endless potential for beauty and originality.

Using the Golden Ratio throughout the overall design of the aquascape, you have the opportunity to implement a wide variety of hardscape and plant life. 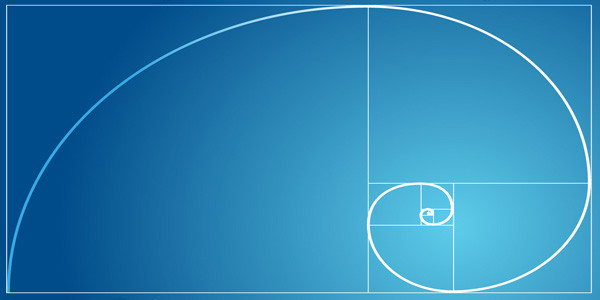 Most common nature aquascapes depict what you would see in a natural setting such as rolling plains, hills, rainforests, or mountains.

While the aquascape may at first seem hastily put together or misbalanced in its presentation, the reality is that these designs require an immense amount of skill, planning, and intricate detail to create such a scene.

There are many distinct features of a nature style aquarium that define the aquascape.

The use of the Golden Ratio is typically used in the implementation of this style for only one specific focal point in the entire aquascape.

In nature designs, it is common that these focal points use stones or contrasting plants to draw the eyes to the area.

Using the Golden Ratio, the aquascaper is able to create a proportional representation of a natural setting; this is key to the overall atmosphere of the design, as it portrays the scene exactly as it would be in nature.

If there is misalignment or an imbalance in size between objects, it is likely that the aquascape would appear distorted and unnatural, thus derailing the entire focus of the design. 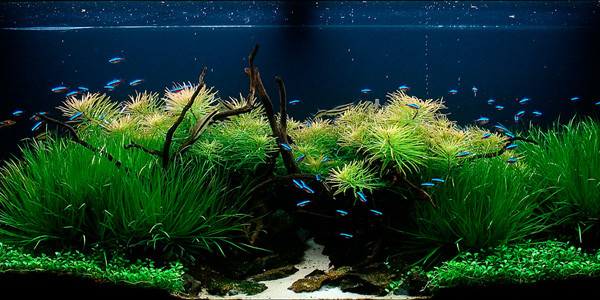 The nature aquascape style also uses three defining shapes in its overall layout of the aquarium.

The use of the Golden Ratio and these layout shapes will provide guidelines for the aquascaper to follow, enabling the focus to be picking the correct blend of hardscape and plant life.

The concave layout implements a lower placed focal point in the aquarium.

This point is then contrasted with tall or high growing plant life that gradually ends at the center, giving a “U” shape to the overall design.

The concave layout is useful for illustrating natural settings such as valleys, roads, or hillsides and creates the illusion of depth in your aquarium. 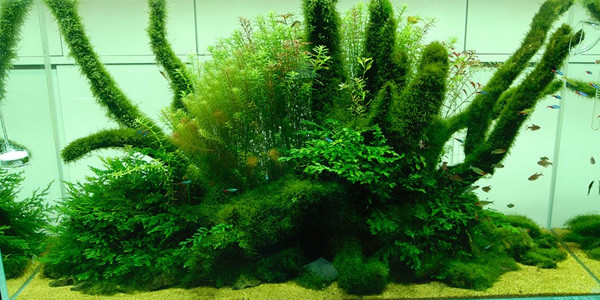 The convex layout often uses stones, plants, driftwood, or other bold prominent centerpieces to give height to the middle of the overall design.

On the outer portions of the aquarium there is often smaller plant life that has been trimmed or is growing low to the substrate layer of your aquarium.

People will commonly implement an island or mountain natural setting when using the convex shape in their nature style aquarium.

A high rising centerpiece that has a single side that gradually diminishes from the centerpiece to the substrate level defines the triangle layout.

A mix of driftwood, stone, and moss are often used as the foundation of this design; dense plant life is often used in the center of the triangle giving the overall design more weight and mass. 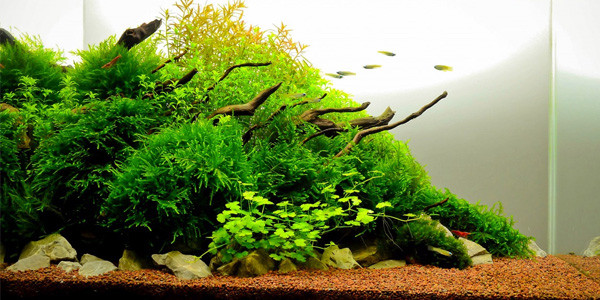 Plant life and fish are a vital component of the nature style aquascape.

Typically, this style uses species of fish and plants found in the actual setting the aquascaper is trying to recreate.

In a nature aquascape, stem plants are often used because they grow so quickly and densely, they are great for creating differentiations in height throughout the aquarium.

In addition, the use of ferns and mosses is also commonly used with driftwood and stone hardscape.

The choice of fish should be based upon the behavior of the species, their shape, and general aesthetic.

Overall, it is best to select fish that won’t disrupt the presentation of your aquarium, such as tetra fish.

In addition, it is also common practice for the fish to be in line with the natural setting the aquarium is meant to represent. 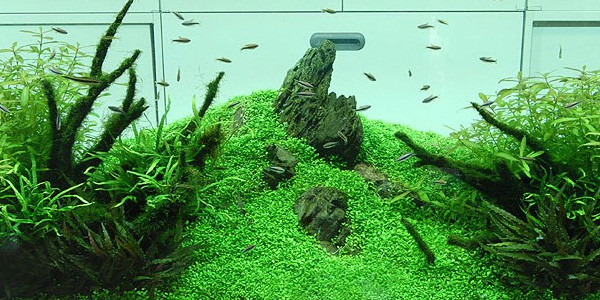 The variety between species and numerous elements of a nature style aquarium result in maintenance related challenges.

In addition, the three layout styles of this design will also necessitate the aquascaper to trim the plant life to maintain the shape aquarium.

The variety of skill and demand for balance between numerous metrics make this style difficult to maintain.

Overall, nature style aquascaping is a beautiful and elegant representation of a natural landscape.

Using many different fundamental design concepts such as the Golden Ratio and layout shapes, the aquascaper has clear guidelines on how to get started.

However, the implementation and management of this style requires intricate and dynamic skill to sustain a healthy aquarium.