You may not consider the fish in your aquarium to be part of the décor, but you might be mistaken.  One way to add some color to your tank is by adding exotic fish.  Many exotic fish are known for their vibrant and brilliant color palettes. 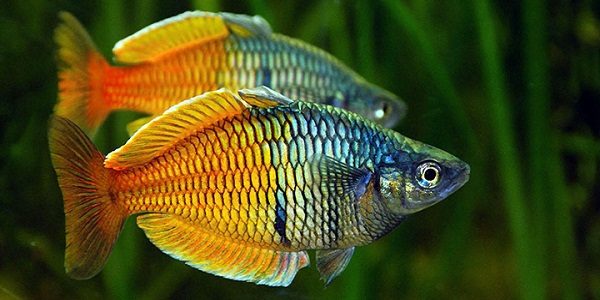 Sometimes referred to as the Mexican salamander, the Axolotl hails from Mexico City and is technically an amphibian.  The Axolotl has exotic looks, but also has some exotic needs.  First and foremost, they are carnivores and will need a steady diet of feeder fish, insects, or worms.  Sharing a tank with small fish is not a good idea.  Secondly, they have sensitive skin and will need to be housed with a smooth sand base layer.

Finally, don’t skimp on the water!  They will need more than 10 gallons of water and will require regular water change outs as well as periodic water testing.  If you can keep all of these requirements in mind, then the Axolotl is a unique addition for any aquarium.

Hailing from Lake Malawi in East Africa, the Malawi Cichlid is renowned for its vibrant colors.  Similarly to the Axolotl, the Malawi Cichlid has some specific environmental requirements.  To keep their colors bright and their behavior charming, make sure to keep the aquarium’s environment as similar to their natural setting as possible.  Give them plenty of hiding spots, such as rocks and plants and keep an eye on the water temperature.  You’ll want to maintain a stable temperature, but that is true for most fish so it should not come as too much of a surprise.  These fish are perfect to keep in almost any size grouping, though be careful not to have them outnumbered by other species, as turf wars have been known to break out.

Strong jaws and teeth like razors make the Arowana appear like something out of a dinosaur film!  Originally from the Amazon River Basin, the Arowana can grow as long as 4 feet in their natural environment and have been known to hit more than 2 feet in captivity.  This mandates a larger tank be used if you plan on housing an Arowana.  Specialists suggest at least 48 inches by 48 inches, or larger, to provide them with plenty of space.  They also prefer live food, including shrimp, crab, or insects, though pellets and frozen food can work in a pinch.  As with any animal of that size, higher input will lead to higher output, so be sure to have an efficient filtration setup. You’ll want to mimic their natural habitat with plenty of sand, rocks, and plants.  A final word of warning is that some breeds of Arowana have been known to jump out of the water. Keep a lid on their tank or be ready to get them back in the tank should they decide to take flight!

Staying in the vein of Amazon River Basin natives, but switching gears back to the Cichlid, the Discus is a colorful fish with bright markings, unique patterns, and come in a rainbow of color choices.  This fish gets its name from its equally unique disk shaped appearance. Several decades of misinformation have fueled the misconception that the fish are “high maintenance,” but that could not be further from the truth.  With regular care, aquarium maintenance, and attention to detail, the Discus can be a great addition to any tank.  Some of the more sought after variations are the blue, red, and turquoise, though there are color choices for almost any aquarium decoration style.  They have been known to grow from a half foot up to a full foot so make sure your tank can accommodate those sizes.  As any enthusiast can attest to, the Discus have been known to develop unique personalities, including behaviors such as recognizing their owners and even swimming up to the edge to greet them when they get close to the aquarium. 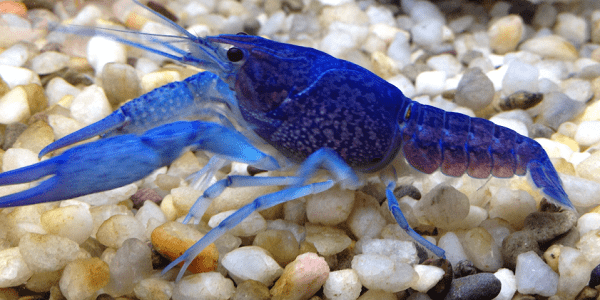 The Electric Blue Lobster is neither electrical nor a lobster!  The crayfish species is native to Florida and typically grows to between 5-7 inches long.  Experts agree that a 20-gallon minimum tank is ideal for the crayfish.  That size will also allow you to provide many nooks and crannies in which to hide and explore, something crayfish enjoy immensely.  In addition to their love of exploration, they also enjoy a good fight.  Most crayfish are opportunistic omnivores and won’t pass up a chance to eat a smaller fish that shares the same aquarium with them—keep that in mind when planning out your environment.  With routine care and environment maintenance, the Electric Blue Lobster can live as long as five years.

The Tiger Fish, known as Datnoids, originate from Indonesia and Thailand.  They look like swimming tigers with orange and black tiger stripes.  These fish can grow to a length of more than 2 feet so make sure you get an aquarium that can handle that size fish.  These are another species that will appreciate every effort you can make to recreate their natural habitat.  Provide plenty of plants and hiding spots to encourage their hunting and stalking natures.

Switching back to the Cichlid family, the Oscar is a popular fish that hails from South America.  The Tiger Oscar is another orange and black patterned fish whose name is derived by its similarity to a tiger, at least as far as colors are concerned.  If jungle-cat-themed fish are not your thing, there are plenty of other color options including red, yellow, and even albino varieties.  The Oscar typically grows to a length of about one foot so you’ll want ample space for them to swim and turn around.  Some enthusiasts recommended 55 gallons as a starting point, but bigger is always better.

The Oscar is also known to be somewhat rambunctious, moving objects found and pulling plants out of the sediment, so plan for this by securing decorations and investing in heavier objects that can’t be secured. Another example of an aggressive carnivore, the Oscar will probably be best with other Oscars or other South American Cichlids.

Stingrays may not sound like your typical aquarium resident, but they are quite popular among hobbyists.  Originally from the Amazon River Basin, these fish are used to hiding, so be sure to provide ample coverage along the bottom of your tank.  And while we’re on the subject of the bottom of the tank, stingrays require fine sand as opposed to a conventional substrate.  They can grow to be as long as three feet and up to three feet in diameter so a large tank is a must have.  Different species have different requirements, including, but not limited to, fragile skin and tails.  Some even have venomous tails so be sure to check on all these aspects before committing to a stingray in your aquarium.  As far as neighbors go, plan on going with larger, non-aggressive fish to keep in the same tank as any stingray, though they would look fine alone.

The final Cichlid on our list comes all the way from Malaysia.  The Flowerhorn Cichlid is technically a hybrid, but remains a big hit amongst aquarium enthusiasts due to their nice size and broad range of color choices.  Most have dark, flower-like markings (hence their name) and come in color choices such as orange, yellow, red, blue, and pink.  The Flowerhorn may be a beauty, but it is also something of a beast.  They tend to be aggressive so only one is suggested per tank.  In fact, they prefer to have the entirety of their aquatic environment all to themselves.  As far as diet and health go, they prefer live food, but can subsist on pellets or flakes. They typically grow upwards of 1.5 feet and can live for almost a decade.

A Southeast Asia native, the Green Spotted Puffer Fish exhibits a greenish-yellow hue and is adorned with black and brown spots.  They are renowned for their engaging personalities and behavior.  They typically live for up to ten years (sometimes longer!), but do require a knowledgeable owner to keep them thriving.  While they don’t typically get much larger than a half foot long, they are quite aggressive, meaning they work best when kept in a tank by themselves.