Setting Up an Aquarium Chiller Properly

As their names suggest, aquarium chillers are devices that lower the amount of heat in an aquarium’s water. This is typically done by pumping in cooled water to offset the heat added by nearby pumps or lights. You might think to yourself, why would I want to reduce the temperature of the water for my tropical fish when they are in warm water in their natural environment? The answer to that question, like so many things in life, is much more complex than a simple yes or no. 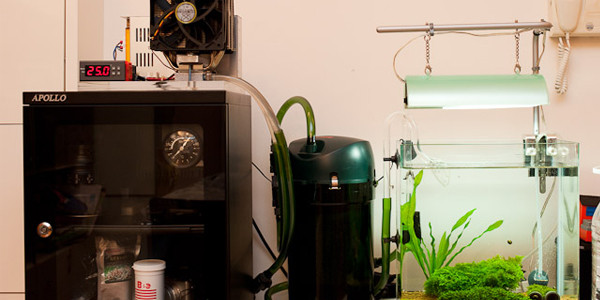 Just like any other creature, any type of fish you put in your fish tank will want the temperature to be just right. Water that is too cold is equally dangerous to water that is too hot, albeit for different reasons. Fish will thrive when the water in their tank is the proper temperature and there are minimal fluctuations. When a person gets too hot or cold, he or she can simply adjust the thermostat. Fish don’t have that luxury so make sure to keep their water a constant, appropriate temperature. That having been said, why would you need to chill their water? Let’s take a closer look.

As mentioned previously, any added accessories have the potential to add head to your aquatic environment.  The two most notable culprits are lighting solutions and pumps, though anything electronic has the capacity to introduce new sources of heat to the aquarium environment. When there is too much heat in the environment, the level of life sustaining oxygen drops, causing difficulty in breathing for the fish in the environment. Increased temperatures can also promote annoying algae growth (Learn how to avoid algae growth) and lead to other parasites entering the tank. The bottom line is that stability is of the utmost importance. As long as the temperature remains constant, the fish will be much happier than in any other situation.

Get the Correct Chilling Solution 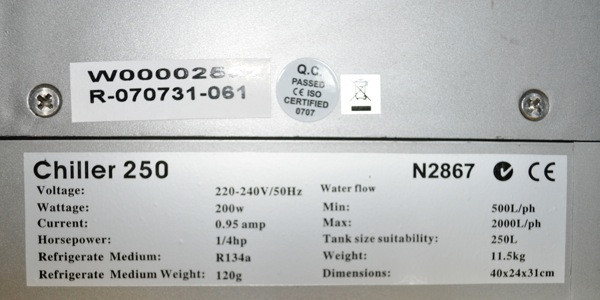 Choosing the proper aquarium chiller is just as dependant on the other factors in your tank as the lighting, the plant life, the pump, and even the type of substrate. The last thing you want is an underpowered chiller.  It would not do a suitable job keeping the water at a stable temperature and might even run hot, adding even more heat to the environment. One of the most important factors to keep in mind when selecting a chiller is the water volume they are rated to cool. For example, if you have a 50 gallon tank, you might think a chiller rated for 50 gallons of water would be sufficient.

However, chiller ratings do not factor in additional heat sources such as pumps or lights. Even though you may feel that you are spending additional money that will not be put to good use, you’ll need a chiller rated at higher than 50 gallons to keep your tank cool.

Think of your entire aquarium as an investment, much more than a simple hobby. Investments require money and you don’t want to spend money on tanks, plants and fish then buy an underpowered chiller and risk the entire environment not being suitable. When you think about long term costs, you’ll want to get the proper chiller for a multitude of reasons. An underpowered chiller (or one that is “good enough”) will probably end up running for more than the suggested 15 to 20 minutes an hour. The more it runs, the more electricity it uses (which costs money) and the more heat it puts into the environment, counteracting the very purpose it was supposed to serve. Overrunning a chiller will also shorten its usable lifespan, meaning you’ll have to shell out even more money to replace it sooner.