This will be the last part of my Goldfish Series. In this segment, I will be sharing some of the common goldfish diseases.

If you already owned goldfish or considering getting one, you should know what are the common goldfish diseases.

And more importantly, what can you do to prevent your goldfish from getting it. 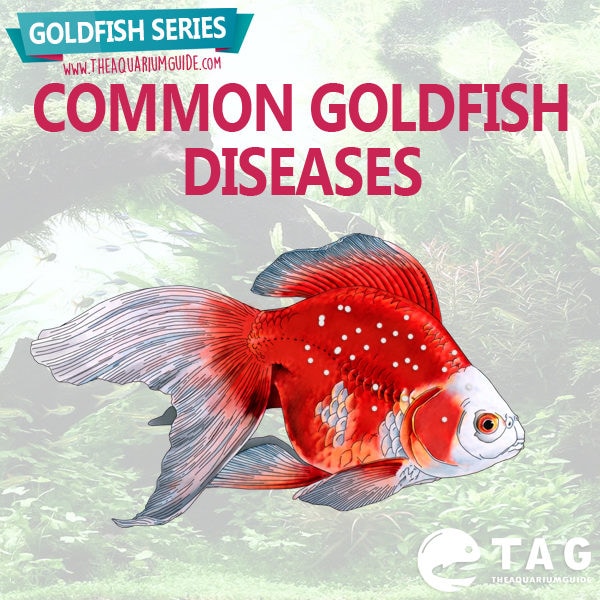 A well cared for goldfish will rarely become ill, as MOST goldfish varieties are very hardy fish.

Though when you introduce new fish or props into your tank, this may stress the goldfish and weaken its immune system making it more susceptible to disease.

Also, introducing new fish or paraphernalia may also bring unknown parasites, forcing everything to be quarantined for about two weeks to observe any signs of disease.

Here are some of the most common goldfish diseases, their symptoms, and how to cure them:

This is the most common disease affecting freshwater fish.

Any new item or fish in the tank can bring it and cause stress on goldfish.

Small white spots covering your goldfish’s body and fins can determine if your fish is suffering from Ich.

Your goldfish may start to behave oddly, including rubbing against tank objects, refusing food, moving its gills faster, or having clamped fins.

In early stages, Ich may be cured by raising your tank temperature for a few days and following a thorough cleaning routine.

Other treatments include 0.3% salt solutions or medication containing copper, malachite green, or formalin.

Stressed goldfish may develop this secondary bacterial infection, especially after having another injury or disease.

Fins and tail will look torn, ragged, or red-streaked and, in advanced stages, may even become white as bacteria continues to consume your fish.

If treated too late and allowed to get to the fin base, the bacteria will eat its skin tissue and the fins won’t be able to grow back.

The first treatment should be adding 1 teaspoon of salt per gallon of water for about 5 days.

If no improvements can be seen, you should use medication containing minocycline, but you must remove the active carbon filter.

After the treatment, change about 25% of the water to remove the extra salt.

The swim bladder regulates the fish’s balance underwater and helps in swimming up and down.

This disorder may have multiple causes including overfeeding, bacterial infection, constipation, egg impaction, or physical deformities, especially in fancy goldfish.

You will notice your fish floating upside down, pointing its head upward or downward, list on one side, or unable to swim to the top or bottom of the tank.

At first, stop feeding your fish for 2-3 days then feed with boiled, peeled peas.

You can also try increasing the water temperature up to 78-80° Fahrenheit and add some aquarium salt (1/8 tsp per 5 gallons).

If this does not work, feed medicated food or a broad-spectrum antibiotic.

Relieve water pressure by emptying 50% of the tank if the fish are stuck at the bottom.

Add more plants for fish floating on the surface, for extra soft protection, and apply petroleum jelly to any body part out of the water.

These two parasites affect fish by feeding on the slime coat, making them vulnerable to other infections.

Skin flukes bear live young, while gill flukes lay eggs in the tank and on the fish’s gills.

Your goldfish will start having clamped fins, an excessive slime coat, and sores or ulcers may appear.

Your fish will start scratching against tank objects and isolating themselves in remote tank corners.

Fish with gill flukes will have irritated gills and gasp at the surface because of stifled gills.

Salt treatments have shown little effect, so medication has to be used.

Repeat treatments twice a day, every fourth day, to take care of the remaining eggs.

This is one of the worst diseases affecting aquarium fish, and little to no treatments are known to be reliable.

The most common symptoms are scales standing away from the fish and a bloated body.

Remove any affected fish before it contaminates its tank mates.

Expensive antibiotics may be used, together with some brine or tonic, and water changes should be done twice per day.

Unfortunately, these treatments rarely work, so it’s best not to prolong your goldfish’s suffering and humanely put it to sleep.

Always remember prevention is easier and less expensive than treatment, so keep your fish in good shape by feeding adequate balanced meals and keeping the water pristine.

Always look carefully for any signs of illness and isolate infected fish immediately.

By being aware of the issues that may arise, you can protect your fish and the entire aquarium population.