The ghost shrimp, or glass shrimp as it is otherwise known, is a very inexpensive and easy to keep crustacean. It can be kept as a feeder for larger and more aggressive fish, such as cichlids for example, which would hunt shrimp all day long. 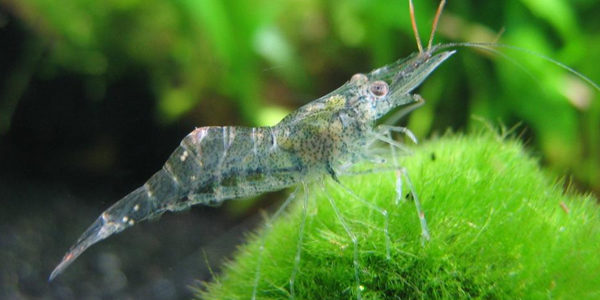 Ghost shrimp are great aquarium cleaners, as they are scavengers and search the gravel for food or leftovers from other tank inhabitants. This is why the tank they are kept in should not be the cleanest.

Although they are very small creatures, be careful not to overcrowd smaller tanks with fish and shrimp. Ghost shrimp will also contribute to the tank’s bio load, which will decrease the water quality and cause an unhealthy environment.

Due to their translucency, ghost shrimp look good in aquariums with black substrate/background or many live green plants.

Ghost shrimp like to live with many live plants in an environment of moderately moving water. They can even tell a live plant from a fake one; live aquarium plants provide shed matter shrimp like to eat leading to a cleaner aquarium.

Also, plants, along with decorations and rocks, provide ideal hiding places for the little crustaceans and can make them feel more at home.

Ghost shrimp feel best in tropical conditions: the water should be around 65-85° Fahrenheit, feeling their best at around 75 degrees. Higher temperatures can accelerate growth and reproduction rates, while lower temperatures lower the shrimp’s immunity and can lead to disease.

A heater should be placed in the aquarium if kept in a colder room or if you live in a colder climate.

The pH should be between 7.8-8.0 with no sudden changes. Be very careful when treating water or other fish in the aquarium with medication. Ammonia, nitrites, and nitrates should always be monitored and most of all, avoid copper accumulating in the water, as it is fatal to the shrimp.

Nitrites and ammonia should be 0, while nitrates should never be higher than 20ppm.

A water filter should always be available in the aquarium, even though ghost shrimp like to do all the cleaning. An internal sponge filter is the best option, especially if you have a small tank (about 5-gallons), as it will also provide an extra food source.

For large tanks, external filters are a better option, as they help change foul water and larger debris.

Companions for your Ghost Shrimp

Ghost shrimp do best in one species aquariums or along with other small shrimp species, like the Red Cherry or the Crystal Red Shrimp. They are pretty social creatures and interact well with their own kind.

If you plan to keep your ghost shrimp on their own, keep in mind that too many can get aggressive against each other.

Ghost shrimp can be placed with other small snails or fish, such as the Betta Splendens, but it always depends on the Betta, as their moods are prone to sudden changes. Some aquarists observed Bettas would constantly chase the shrimp or would start hunting it suddenly after a long while it didn’t care about it.

The best option when placing shrimp and fish together is to start with a well-established shrimp population, as safety in numbers will decrease the chance of ghost shrimp being eaten.

Keep in mind larger fish are very likely to eat or harass the shrimp, so consider placing it with smaller fish only. Young glass shrimp should only be kept with other shrimp, as they are even more vulnerable than the adults.

Food for your Ghost Shrimps

It’s very easy to feed your ghost shrimp, as it will eat almost anything found in the aquarium. Their diet consists of algae, dead plant matter, or uneaten bits of food. Also, boiled soft vegetables can be an inexpensive solution, while providing the shrimp with many nutrients.

Of course, processed foods can also be fed to the ghost shrimp such as pellets designed for small fish or shrimp, fish flakes, or wafers. Mostly anything that can easily be broken into small bits will be acceptable.

As the ghost shrimp has clear bodies, food can be seen while passing through the digestive system. Ghost shrimp should be fed twice a day and should be given the amount of food eaten in about 1-3 minutes.

Ghost shrimp are pretty little creatures and inexpensive in bulk quantities, yet very easy to keep. They make an interesting addition to small aquariums or can form a colony of their own.

Glass shrimp are also useful in reducing nitrates and algae while having a very low biological footprint, but you should always keep an eye on a tank containing fish and shrimp together. With a little monitoring of the tank, they can live up to two years.