More and more people have become fascinated by sharks; visits to aquatic museums or zoos and an increase in documentaries continues to spark interest, but what about keeping a shark in a fish tank?

It is possible, though quite rare and an extreme hobby to undertake; however, freshwater “sharks” are affordable and can be kept in a freshwater tank.

To clarify, freshwater sharks are nothing like the notorious big tooth predators that live in the oceans.

These fish are called sharks because of their shark-like appearance—with or without teeth and  large in size, but they are not real sharks.

Many freshwater sharks can grow quite large and you would need an immense aquarium—anywhere from a 55-gallon to a 150-gallon tank.

They look and swim similar to actual sharks and when placed in an aquarium can be quite a view for enthusiasts.

There are many different types of freshwater aquarium sharks and they come in a variety of shapes, colors, and sizes.

They are usually omnivores, but can be carnivores and are descendants of the Pangasiidae, Cyprinidae, or similar families.

A thing to watch for

It is important to know when you choose to keep a freshwater shark fish they can be a threat to other fish companions, especially if there are small fish in the tank.

Freshwater aquarium sharks can be predators and see small fish as live food.

This is more common when they reach quite larger sizes.

Some freshwater sharks are not predators, but they are aggressive and can bully, bite, or nip the fins of other tank companions.

When deciding on a shark fish, research the types of fish they may become aggressive towards and which ones will not be an attractive food source for your shark.

Find out other aggressive freshwater fish.

The following are the types of the freshwater fish that are considered freshwater sharks. 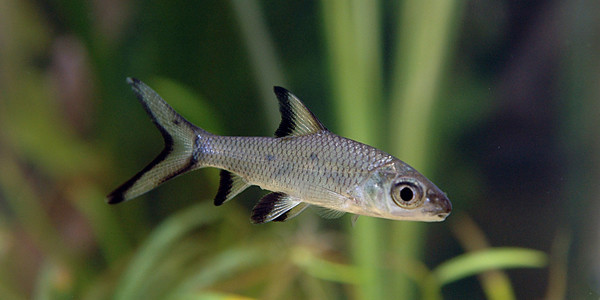 It is also known as tricolor shark or shark minnow, comes from the Cyprinidae family.

This fish resembles a shark by its body shape, silver color, and its fins.

They are considered peaceful when they are small and like to live in shoals to socialize with each other and swim in schools.

The silver sharks may become a semi-aggressive or predatory to smaller fish when they grow. 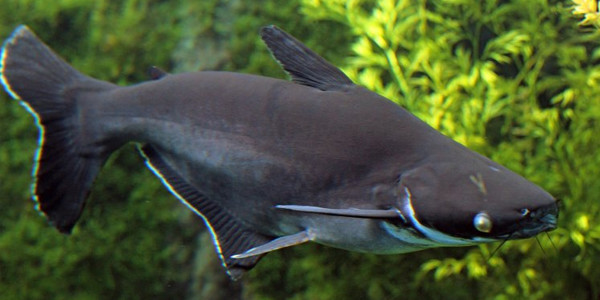 This is a good example of a freshwater shark by its shape, color, and the way it swims.

It is a member of the Pangasiidae family, a type of a catfish shark.

This fish grows very large and you should own a huge tank to keep this type of fish. 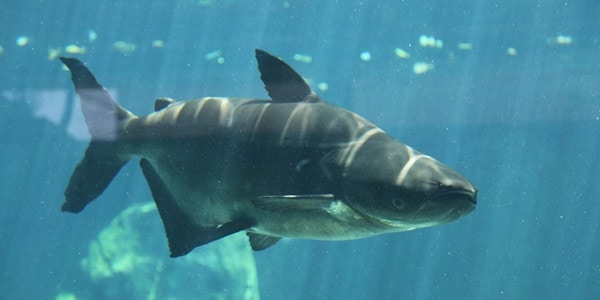 This is the biggest one of the catfish sharks.

It is similar to the Iridescent shark except that these fish grow up to 3 m (9.8 ft.).

Paroon Shark is another catfish shark that is similar to the Iridescent shark and has a similar look.

Its origin is from Mekong and Chao Phraya basins. 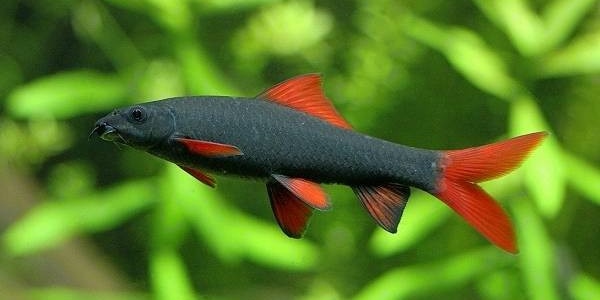 Red tail shark is smaller in size and has a semi-aggressive, territorial behavior.

It is a fin biter, thus it should not be kept with fish with long fins.

This fish has a black body and orange tail, hence its name.

Usually when the orange tail starts to fade, it is an indicator something is wrong with the fish.

These fish are very common in the aquarium world and they come from the Cyprinidae family.

There is also an albino variant with a white body and orange tail. 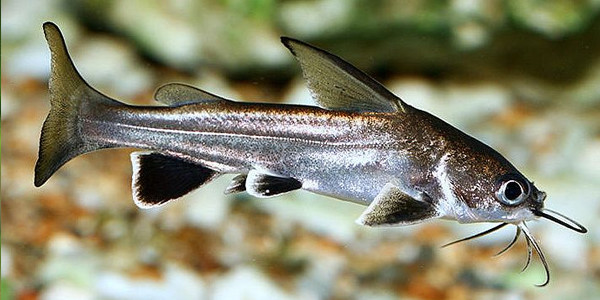 Columbian Shark is a catfish shark that is peaceful by nature, although it can grow large in size.