Aquarium snails have sometimes been viewed as detrimental to freshwater aquariums, but this is not always an accurate assessment.

There are some snails that are actually quite beneficial to freshwater aquariums.

Let’s take a closer look at some of the pros and cons of snails to help you decide what kind (if any) to add to your tank. 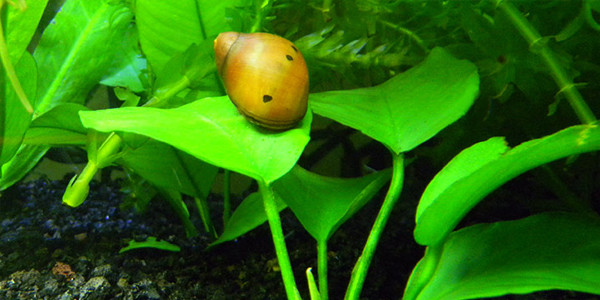 Anyone with experience in the realm of aquariums will have some preconceived notion in regards to aquarium snails.

While some may be on point, there are no doubt others that are unfounded.

It is true that snails have been known to be a nuisance towards plants and can interfere with the intake on pumps and filters.

However, they can serve beneficial purposes as well; one of the most common benefits they provide is as a cleaning crew.

Snails are notorious scavengers and will eat detritus that winds up at the bottom of the tank, en route to your filter, negatively impacting the tank’s water quality along the way.

To Snail or not to Snail

Different species of snails will naturally have different diets.

Some, as mentioned previously, will definitely scavenge for whatever food they can find.

This is obviously beneficial as it positively impacts your tank’s water quality.

The snails eat detritus and other unwanted materials, which keeps harmful chemicals, such as nitrites and ammonia, from accumulating.

On the other end of the spectrum are snails that are carnivores; these species typically feed on smaller aquatic animals including fish eggs.

This is an important distinction to keep in mind before introducing snails into your aquatic environment. 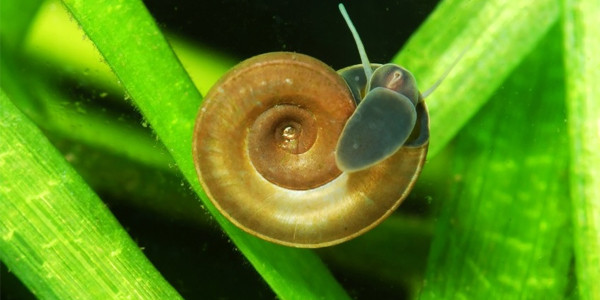 While there are dozens of beneficial species of aquarium snails there are some better-known varieties such as the apple snails, trumpet snails and nerite snails.

The Apple Snail comes in a rainbow of colors including zebra-like patterns, as well as blues and golds.

These particular snails can grow up to half a foot in diameter and are known to be quite prolific when it comes to breeding.

Considering those two facts, they might be best for larger tanks.

Apple Snails have also been known to eat aquarium plants when they get hungry so make sure to keep them on a regular feeding schedule if at all possible.

Trumpet Snails are considered quite pleasing to the eye.

Like the Apple Snail, they come in a wealth of color options.

Unlike the Apple Snail they tend to feed mostly on detritus.

It is not uncommon to see a Trumpet Snail dig through a substrate layer to feed on the leftover food and waste products that float down to the bottom of the tank.

They are mostly nocturnal and are generally considered to be great “neighbors” in almost any aquarium.

If you want to learn more about the trumpet snails, click here.

Another pretty, yet functional snail is the Nerite.

Typically measuring between a half and a full inch, the small guys are a big help when it comes to one potential aquarium pest: algae!

The Nerite snail is renowned for eating algae off of almost any surface in the aquarium.

They are also known to be escape artists, depending on the layout of the tank, so if you see one that has escaped, get it back in the tank as soon as possible. 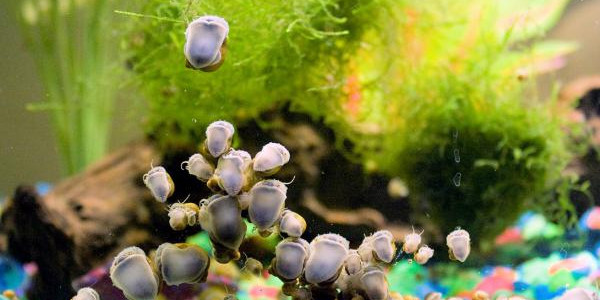 Not So Beneficial Aquarium Snails

Some other snails should probably be avoided in the world of aquarium hobbyists.

Similarly to their beneficial brethren, they range from merely a nuisance to being downright destructive.

The pond snail is a prime example of a bad snail for your tank.

Measuring up to only a quarter of an inch, they are able to hide in all sorts of nooks and crannies, which is not a deal-breaker.

However, when you couple that with the fact that they are notorious for reproducing, you could have a problem on your hands.

Some innocent overfeeding will turn these natural scavengers into grade A pests!

Another entry for the most (un)-wanted list is the Ramshorn snail.

Available in a variety of colors including pink, red, blue, and brown, this snail is named for the horn-like shape of the shell it lives in.

This snail gets its bad rep from management issues, too; if overfed, this species is likely to reproduce with wild abandon.

As we’ve seen, some snails are very beneficial, while others can be quite annoying.

Remember that some on the “bad” list receive a reputation that really has more to do with their owner’s actions than their own behaviors.

Once you find an aquarium snail that interests you, make sure to research all aspects of its behavior and requirements to see if it will fit in with your tank.