The Foxface is a very beautiful marine fish that can really make an elegant addition to your marine aquarium. It is the kind of marine fish that usually does well provided that the conditions in the tank are kept optimal for it.

It is scientifically known as siganus vulpinus or simply as the foxface rabbitfish. It loves to eat algae and one of the cool things about it is that it can help to keep your tank free of algae.

They are super colorful and a group of them put together in one tank is us just amazing to look at. However, don’t be fooled as there is a lot of care required when handling them.

They are very colorful fish that will be the center of dominance on any aquarium they are added to. They have small mouths resembling the mouth of a hare with dark and large eyes that highlight their unique beauty.

The face of the fish is light in color and show a speckled coloration on the lower part. The overall body color of the fish is a mottled yellow to brown with a chest that is darkish in coloration.

The elongated snout of the fish makes it exhibit a look that’s almost similar that of a fox, reason behind its name.

It is interesting to note that the fish can change their color when they feel frightened or simply when they are sleeping. This capability to change their coloration to mimic that of the surrounding is designed to help it survive against possible attack by predators.

The fish in the wild is usually found inhabiting shallow lagoons in the tropical waters of the Western Pacific. It really likes spending most of it’s time in low light areas of the ocean moving in between the coral reefs in search for their food.

Because the Foxface is a kind of marine fish that likes to swim a lot, providing a larger tank to enable it have sufficient swimming space is advised.

For one fish, providing a tank that is at least 75 gallons or more is better. It is a saltwater fish therefore it should be housed in a marine tank. Additionally, the foxface is a shy fish and therefore you should provide rocks and cave-like structures where they can hide when they feel threatened.

Ensure that the water quality is stable at all times because good quality water is very vital for the health and survival of this fish while in captivity. It’s is very sensitive to dirty water and therefore the water must be kept clean at all times.

It is advisable to change between 10 to 25 percent of the tank water every month. If you wish to introduce more inhabitants in the tank, it is best to do it gradually rather than instantly.

The tank water temperature should be maintained to 72 – 78°F. Remember , in the wild the fish inhabits tropical areas of the West Pacific so you will need to provide a temperature that is almost similar. For the salinity level, it is best to set that of the tank to between 1.020 and 1.025.

The temperament of the fish is peaceful and therefore it makes a great candidate ideal for a community tank. The good news is that even predatory members of the tank will be scared of it due to its venomous spines. This is a survival adaptation that helps it keep potential predators at bay!

Please remember that it is only best to keep the fish in a community tank when still young but when it is mature, it is best to keep it alone or with a mate in a different tank.

It must be noted that the fish has got spines that are venomous that can inflict very painful stings on the hands. This therefore calls on hobbyists to be careful when it is necessary to handle the fish. In case you get stung by the fish it is advisable that you seek immediate medical attention from a healthcare expert! 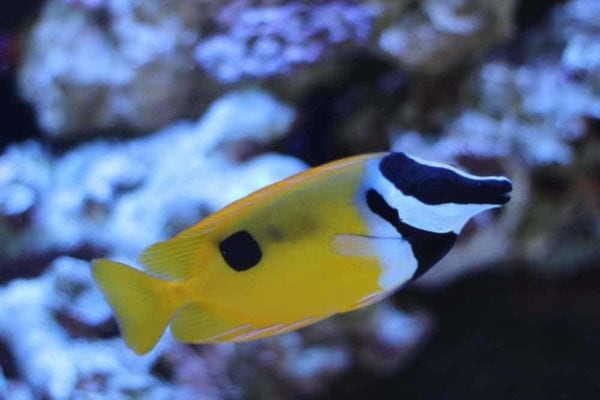 Foxface Rabbitfish are primarily herbivores that feed on algae and zooplankton when in the wild but will also feed on algae even when placed in a captive aquarium.

When kept in a tank that has corals, there is chance that the fish may occasionally nip on corals when they feel hungry so don’t be surprised.

For more information about what you can feed to the fish please read below to find out more:

No aggressive behavior has been observed with the foxface fish they are generally a peaceful fish species that will readily live with other tank mates. The good thing with them is that they are herbivores and will not attempt to feed on other fish species housed together with them.

It is important though to note that when he fish grow and mature they have tendency of establishing territories and it is best to keep a male and female pair in one tank.

It is claimed that, a male a female foxface pair will form a long lasting bond until one pair dies.

There have been no reported success in breeding the Foxface fish in captive aquariums and usually most of those available for the hobby are either caught in the wild or raised in special fish farms.

The females of the fish usually scatter their eggs usually producing pelagic eggs in a somewhat mating ritual that occurs in the mid-water positions.

The resulting egg after fertilization can attach to plankton in the water and finally end up settling on the reef at the bottom.

This fact makes it difficult to breed the fish in captivity and many attempts that have been made to achieve this haven’t been fruitful either.

The foxface rabbitfish is a beautiful fish that is wonderful to look at and a would be a spectacle in your tank. However, it is difficult to handle due to the poisonous spiked fins and required extra care in it’s tank environment.

I would recommend this fish only to more experience aquarium hobbyists that want a new challenge and an awesome addition to an aquarium.