The Bucktooth Tetra, or Exodon Paradoxus, is a pretty tricky fish to keep and many aquarists state it is even more vicious than the well-known Piranha.

They have a pretty particular behavior, but are hardy and do well in large single species tanks. The funny part about their name is they are not buck-toothed at all, but would still manage to eat the scales of other fish.

Bucktooth Tetra are not very large, reaching up to 2.9 inches, but can even attack larger fish like some cichlids and bully them until becoming ill because of stress.

If well cared for, the Bucktooth Tetra can live up to 10 years. 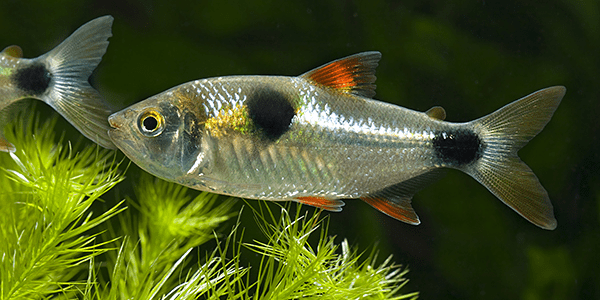 Heavy planted tanks are the best setup for the Bucktooth Tetra, as plants provide lots of hiding places for bullied individuals. Also, live plants help filter and provide oxygen to the water, which is a necessary asset for a large community tank. You can also add a few driftwood pieces for effect.

Water conditions should be kept constant, as sudden changes may stress the fish and affect their immune system. Suitable temperature is between 73-82 degrees Fahrenheit and pH should be slightly acidic, between 5.5-7.5. The Bucktooth Tetra prefers soft water, between 0-20 degrees.

Always make sure you choose a high-quality filter, as large groups of fish have a big bio-load the filter needs to cope with. Poor water conditions may also affect their behavior and condemn the Bucktooth Tetras to fight each other.

In the wild, the Bucktooth Tetra feed mostly on insects or other fish’s scales, but this does not mean you must feed them live food only.

They will accept dead alternatives such as chopped prawn, mussels, bloodworms, krill, lancefish, or earthworms. Dried foods like flakes or pellets may also be accepted, but make sure their diet consists mostly of meaty foods.

Occasional treats like insects caught around the house are very appreciated by these vicious predators.

Tank mates must receive enough food, as the Bucktooth Tetras are known to be very greedy feeders. To be sure you have a quiet tank, it is best to feed your Bucktooth Tetras smaller amounts of food, several times a day.

Automatic fish feeder would be a useful accessories for your tank.

Usually, the Exodons are very hardy when kept in good water conditions. Keeping them in small groups though may trigger aggressive behaviors toward each other, which can cause them a lot of stress and thus decrease their immunity.

Bullied fish may finally catch some bacterial infections, which would finally lead to them being killed by its tank mates.

The Bucktooth Tetra is a pretty aggressive fish, especially towards other silver-scaled fish, and is known to strip them of fins and scales very quickly.

They have been kept with Loricariids, loaches, or larger characins like Anostomus, but it is still very hard to tell if these fish would still get along well.  New additions may be regarded as food, so make sure you add the Bucktooth last in your tank.

Check out the Most Aggressive Freshwater Fish.

Being such an aggressive predator, the best thing to do is keep these fish with their own kind. Large schools are the best because they keep together and interact peacefully with each other. On the other hand, a smaller school would force them to pick on one another until only one remains.

Larger schools of 20-25 fish would prevent any of them from being attacked and usually only the sick or weakened specimens would be attacked.

Very few people breed these fish, as putting only a pair in a breeding tank often results in fighting rather than mating. Another major drawback is males cannot be told apart from females based upon their physical appearance.

Breeding has to be done in the community tank where there is a big chance females and males stay together.

If they manage to mate, though, the parents will eat their eggs, so you must keep an eye on and remove them as soon as the female lays her eggs. If this is not possible, provide deep narrow places for the eggs to hatch where adults cannot reach them.

Once the fry hatch, remove them to a safe, separate tank to avoid them being seen as live food by the adults.

If you like predators and aggressive fish but lack the space for housing cichlids or Piranhas, these little predators are the best for you. However, remember to keep your Bucktooth Tetras in large groups if you still want to keep them all.