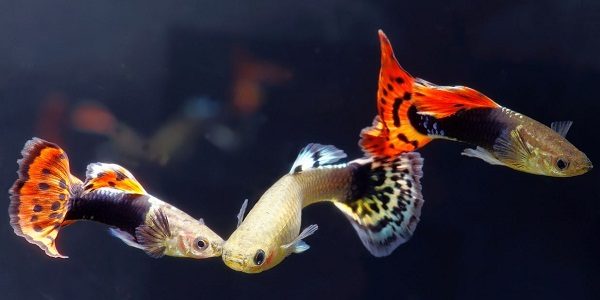 Guppies (Poecilia reticulata) are the most popular freshwater aquarium species. They originate from Central America’s freshwater sources. Guppies are also known as million fish, rainbow fish, and fancy tail guppy. This species has a beautiful and colorful body structure that make sit interesting to keep and produce many of them. These fish are easy to care for and breed and have been particularly bred for their color. Guppies are omnivores, which means they eat small insects, zooplankton, algae, and detritus, but flakes and freeze-dried or live food can be purchased for feeding. A healthy lifespan (3-5 years) and breeding depends on the quality of the food.

Genetically weak guppies should be eliminated from the tank in order to produce healthy and colorful guppies. Two female and one male guppy is enough to start breeding.It is easy to distinguish males and females from each other;males have a smaller body and colored large tails, whereas females have a dark gravid spot in the anal region of the body.Guppy selection should be done very carefully for successful breeding. The male and female guppies should be young, but old enough to reproduce(male guppies approximately 1 month and females 2 to 4 months old). The caudal peduncles should be thick and male guppies should have large tails.The dorsal and caudal part of the body should be wide and match in color and pattern. Guppies with a flat head, curved spine,or poor body color should not be purchased.

Breeding can be done in a community tank or separate tank. A separate tank is more appropriate for selective breeding, controlling the process, and protecting the fry. It is possible to choose parents and to obtain guppies in desired colors. It is easy to separate parents from the tank after birth. In the community tank, unexpected new guppy combinations will be produced, but in these type of tanks, it is hard to protect the fry from cannibalistic parents.

There are four types of breeding: in-breeding, line breeding, out-crossing, and back crossing.In-breeding mating occurs between first-degree relative guppies. Line breeding is mating the distant relative guppies and can also include breeding two different lines branching from the original trio. Out-crossing is mating two different compatible pure strains (same color that are produced from different breeders). Back crossing is mating hybrid guppies with a parent or with a guppy genetically similar to the parent.

Huge amounts of guppies can be produced very easily in a short time. Female guppies start reproductive life at 2 to 3 months old, pregnancy lasts for 25-35 days and each birth rears 20 to 50 babies. Also, female guppies can store their mates’ sperm making it possible to give birth at different times without the presence of male guppies.

Body size of the newborn guppy is about 7 to 10 millimeters. Color of the fry can be transparent or shades of black and gray. The newborn guppy eats algae and finely ground dry food. Additionally, vegetable flakes, standard flakes, and live brine shrimp can be purchased for feeding. It is recommended feeding should be done twice a day.

In the breeding tank, fries should be protected from any kind of cannibalistic attack. Some parents tend to eat newborn fries after birth. If the birth occurs in a separate breeding tank, the parents should be transferred in to another tank immediately. The newborn guppies should be kept in the tank until they are old enough to survive in community aquarium (in about 4 to 6 weeks).

Aquarium conditions play an important role in healthy guppy development. Lighting is essential for preventing the guppy from spinal deformities. The tank should be lit for 12 to 17 hours each day.In the tank, water should be clean and oxygen levels should be high. The temperature should be 75-82° Fahrenheit(24-28 0C) and a pH 7.0 to 7.5. Filters should be regularly checked and ammonia and nitrite should not be present in the water.

Breeding guppies can be a wonderful addition to your tank and your skills as an aquarist.  By following the specific instructions on breeding, you will produce many viable fry that will go on to be a truly vibrant addition to your aquarium.