Black Neon Tetra (Hyphessobrycon herbertaxelrodi) is a freshwater omnivore of the Characid family, originating from the Paraguay River Basin and Taquari River of South Brazil.

It owes its widespread popularity to its appearance: two distinct, adjoining black and shiny white lateral stripes extending from caudal fin to gill cover, on basic silver coloration; a meticulous look at the fish reveals shimmering green and yellow spots on the white stripe and below the black stripe and yellow coloration on the base of the caudal fin; there is also an easy noticeable, bright orange semi-circle above its big eyes.

It reaches a maximum length of 1.6 inches, with males being slimmer than females. The Black Neon Tetra has a lifespan of up to 5-10 years. 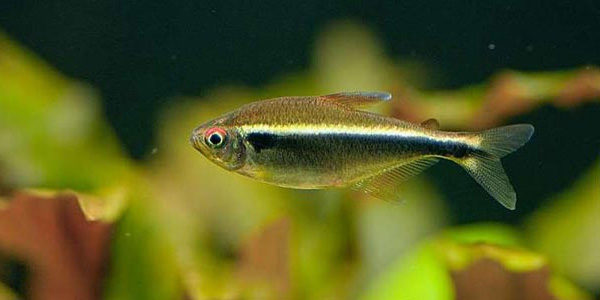 If you want your Black Neon Tetra to thrive, you should consider a minimum 20-gallon biotope tank with dark gravel and subtly lighted, since the shadowy ambiance will make your tetra show the best of its iridescent coloration.

As with most tetras, this one is no exception when it comes to planting the tank.  The Tetra’s aquarium should be heavily planted with some driftwood, branches, and twisted roots added, as well as a few golden brown dried leaves to reach the perfect resemblance of water reflection color present in the natural habitat while also providing more cover for hiding.

On top of that, decaying leaves and other organic materials are beneficial for this type of fish.

In nature, Black Neon Tetras are found in extremely clear waters, so proper filtration and water change systems should be provided in order to remove ammonia, nitrates, and other substances harmful to fish, replace salts, and minerals.

Check out other type of tetras.

Coming back to its natural habitat, this fish usually consumes smaller crustaceans, small invertebrates, filamentous algae, and fallen fruit. In the aquarium, though, they can be fed on various sorts of live, fresh, frozen, or flake food.

Although it can survive feeding on dry flake food, it will do best if offered some live and frozen bloodworms, daphnia, mosquito larvae, brine shrimps, or moina.  The careful addition of some vitamins and other supplements can also positively effect your tetra’s growth.

In such conditions, including a mature aquarium, a smaller number of young can appear without any intervention at all. Still, to gain some serious yield you need to take some action.

As in the case of all tetras, this is free spawning fish, which means they release their eggs and milt into the open water. The best way to prepare for spawning is to separate males and females and feed them on a lot of live foods.

Also, separate males and females intended for breeding from each other, as well as from the rest of the school in order to perfectly control the amount and sort of food they get and other conditions needed to trigger the spawning. The indicator showing they are ready is the stage when females fatten and the color of the males becomes livelier.

At that point, introduce the female and male into a 5-gallon spawning aquarium prepared previously.

Water in the aquarium should be mature with temperature maintained at 80° Fahrenheit, achieved by covering the tank with a towel or something similar.

Lighting should be quite dimmed. The tank should contain some kind of spawning site such as a fine-leaved plant or some artificial analog made of synthetic fabrics, like a mop made of yarn (it is easier to clean and isn’t subject to decomposing or breaking in the spawning tank).

The spawning site serves as a place for fry to attach. It would be wise to cover the bottom of the aquarium with something allowing eggs to fall through, but at the same time preventing adults from eating them (which occurs after spawning to satisfy the need for energy replenishing).

An ideal base would be a mesh, grass-like mat, layer of glass marble, raised plastic grate, or something similar.

Ideally, females should be transferred to the spawning tank the night before males to get accustomed to the new environment and to get the “feeling” of being on their own ground the moment the males are introduced.

At that point it is important to observe their behavior because if males behave in an overaggressive manner they need to be removed back to a separately divided aquarium. The same goes for the females rejecting and attacking the males.

Once all pairs have laid eggs, transfer them back to the separate aquarium. In about 36 hours, the eggs will hatch.

Black Neon Tetra is a schooling fish that needs to be kept in company of no less than six of its own. As a very peaceful fish, its ideal mates are other characids of the same size, gasteropelecids, lebiasinids, smaller callichthyid or loricariid, and non-predatory, small-to-medium-sized cichlids.

Black Neon Tetras swim at the top levels of the aquarium, so it is recommended to keep some peaceful bottom dwelling fish, such as pigmy catfish, to pick up the food falling to the bottom so it is not left to waste.

As for the safety measures, it is recommended to cover the tank because these fish are skilled jumpers and, if given the opportunity, will certainly jump out of the aquarium.

You should also keep in mind that most erratic behaviors are caused by poor water quality, thus clean water and aquarium elements are a priority when it comes to the safety of your fish.