Fish-keeping is a very fun, exciting, and relaxing hobby, but there’s a constant need for caring and keeping track of numerous things in order for everything to remain great.

A famous proverb states, “Prevention is better than cure.”

While this stands true for everything in life to some degree, it’s very important in fish-keeping.

You always need to be on your toes in order to be in control.

One of the most important things when keeping fish is knowing how many fish your system can support.

Everyone wants a variety of fish and that’s perfectly understandable.

Having four fish is always better than one and it’s more interesting to watch a school of fish rather than a sad loner.

The tricky part is knowing when to stop adding fish in order to prevent serious problems that can occur in an overcrowded aquarium.

Understanding the essence of a problem

Fish are found in the wild all across the planet in different environments and waters and they feed differently.

In nature, the volume of water per fish is extreme in comparison to the aquarium environment.

Additionally, in their natural habitat the waste produced by fish and other species is diluted due to low concentrations, hence harmless compared to within the aquarium.

Under regular circumstances, the water in the natural habitat should be good quality as a result.

Nonetheless, the scale of a single tank compared to immense water surfaces is clearly minor.

Closed environments like aquariums need constant attention in order for fish to thrive.

Logically, the more fish you keep in a limited space, the more waste is produced.

Here are some things to keep in mind when planning your aquarium.

Knowing for sure is not easy though.

The only way is to watch how your fish behave in search of some patterns that will make your doubts stronger.

Of course, keep in mind some fish species are normally gasping at the surface in search for air; it’s simply a thing they do, so you shouldn’t be concerned.

One such fish is the betta fish.

However, if it’s repetitive, there is a high chance that low oxygen problems exist in your tank.

Additionally, not all fish are effected in the same proportions by lack of oxygen in the environment.

High levels of ammonia and nitrite

Ammonia, and its decomposing by-product nitrite, is highly toxic to fish.

They are created from the decomposition of waste that your fish produce.

Even in small concentrations, these two can cause severe problems and even death of your fish.

The best way to deal with this is to properly and efficiently filter your water.

Your aquarium must also be properly cycled and a nitrification process should be completed before adding fish to your aquarium.

Typically, if your tank is overcrowded, beneficial bacteria won’t be able to neutralize ammonia and nitrites fast enough and it’ll spell a lot of trouble for your fish. 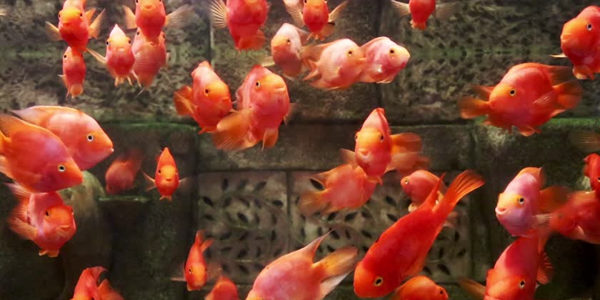 High nitrate levels are often a problem when the tank is overcrowded.

Nitrate is a by-product of nitrite, which is created when beneficial bacteria decompose ammonia.

High concentrations of nitrate will gradually effect the fish negatively in many ways.

This happens because of compromised immunity that stems from high nitrate levels.

The best way to effectively deal with this problem is to change the water in your tank adequately, as this will remove high nitrate levels and replace it with water that contains no nitrates.

Another alternative is adding live plants that feed off of nitrates as another good way of dealing with this problem.

Aggression in an overstocked aquarium

If a tank is overstocked, it can lead to some fish becoming overly territorial.

This could lead to a lot of aggression, which is always a bad thing inside a closed environment such as your aquarium.

Fin-nipping and injuries lead to stress and infections, which both can lead to serious problems.

However, overcrowding in an aquarium is a good thing in some cases and is even used to lower the tension inside the tank.

For example, aquarists use overcrowding as a counter-aggressive method when keeping African cichlids.

In conclusion, aggression could, but will not necessarily, create more aggression inside the tank.

Find out some of the most aggressive freshwater fish.

Stunted fish growth as a result of an overcrowded aquarium

Many aquarists believe fish growth could depend on the size of the aquarium or the fact they do or don’t have enough space to thrive.

Although this is not necessarily the case, it is often a factor in fish growth.

There isn’t a consensus on this matter, as some believe fish release growth-suppressing hormones that hinder their growth in order to adapt to their living environment.

Another possible explanation for fish not reaching their full potential in an overcrowded environment is stress and unhealthy water conditions.

This makes perfect sense, as it is logical that fish cannot be healthy or reach their full potential in terms of growth and size without proper living conditions.

One thought on “An Overcrowded Aquarium”