Taiwanese aquascaping style was once very popular among the aquascaping community; however, in recent years its uptake has seen a decline.

Taiwanese style aquascaping makes use of high terraces, illusions of depth, rich plant life, and small replicas or items placed in the tank to create a feeling of life in the design.

The Taiwanese style tends to blend Dutch and Iwagumi influences in maintaining simplicity and organization, with the end objective being to create an aquascape that is alive and healthy.

Taking note from the Dutch, the use of terraces and space are defined in the design of the aquascape to create organization between the objects.

As a result, it is common for Taiwanese aquascapes to support numerous types of aquatic plant life though not as severely dense as in Dutch styles.

Conversely, Taiwanese style also implements many forms of hardscape such as rocks or differing depths of substrate throughout the design.

While there is no defined system of stone architecture as in Iwagumi, the emphasis of simplicity and natural life is also a key theme in the Taiwanese style.

In order to further personify an aquascape, the Taiwanese style often includes a figurine or artificial character of some sort in the background or foreground of the design.

This adds a dynamic element of the aquascape when compared to other more traditional practices.

Utilizing these figurines and other inanimate objects allows the aquascaper to express his or her imagination through a new medium; as a result, the practice is a definitive Taiwanese style mark. 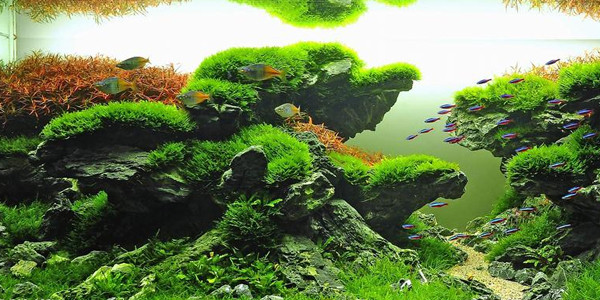 As discussed, the Taiwanese style blends Dutch and Iwagumi styles to create aquascapes with depth, levels, and terraces.

Utilization of stones or large artificial objects is also common in this style and often implemented to create a more realistic scene.

In Taiwanese style it is common to see figurines of divers, swimmers, or representations of sunken wreckage and treasure.

These added effects create a more realistic interpretation of the aquascaper’s imagination.

The use of many different styles is a definitive and unique Taiwanese style trait.

By adding in layers of complexity using hardscape and terraces, the aquascaper is able to create a realistic interpretation of the aquatic scene.

As a result, aquascapers have more liberty in the way they create their vision.

By blending the elements of dense plant life, depth, stone, and a touch of life through a figurine or driftwood, the aquascaper is given the opportunity to allow his or her imagination to soar to the next level.

The beauty of Taiwanese style is that the aquascaper’s main goal is to create a realistic and unique aquatic scene.

As a result the freedom of choice is plentiful when creating a Taiwanese aquascaping style.

When selecting your plants and fish, the most important theme to keep in mind is a realistic scene.

As a result, many aquascapers should elect to use the following:

The combination of these plants along with the choice of hardscape and inanimate objects will enable one to create a realistic representation of the aquatic landscape.

In regards to fish, this should also be considered when trying to create a realistic aquascape.

In theory, the addition of fish should compliment the overall work as well.

This means creating uniformity in the aquascape.

Implementing both schooling fish and individual fish will create a misbalance and chaos in the overall look.

It is recommended that the aquascaper select from a realistic set of species that would live harmoniously in their native environment and, in theory, the aquascape. 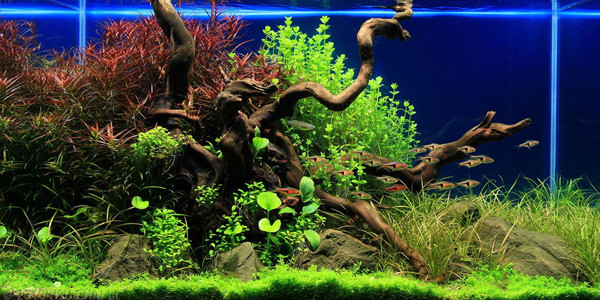 One challenge of Taiwanese aquascaping is the freedom of choice.

Since the end goal of this style is to create a realistic version of your aquascape, the creator is confronted with a difficult set of decisions.

The blend of Dutch and Iwagumi styles provides great opportunity for creativity, but also leaves room for failure when attempting to create a truly unique and realistic scene.

In addition, the dynamic of adding artificial figurines and other content elements like a sunken boat also creates unusual responses in the balance of your aquascape.

Overall, we have seen the popularity of Taiwanese aquascaping decline in recent years as it lacks a defining and beautiful characteristic that separates it from its Dutch and Iwagumi counterparts.

While the style does provide a lot of space for creative interpretation, the addition of an artificial life element has not been enough to distinguish the style and create a following as the Dutch or other Nature styles have.