If you’re looking for a playful, hearty, and beautiful fish for your aquarium, look no further than the South American Cichlid.  This breed comes in a wide variety of color patterns and sizes making them ideal for almost any tank size or decor.  Their playful attitude makes them a fan favorite for beginners and experts alike.  Let’s take a closer look at the South American Cichlid to see what makes them so great. 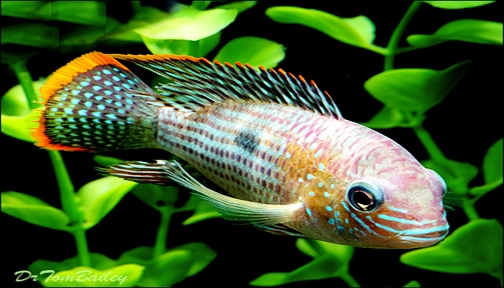 North and South American cichlids have evolved in a similar fashion to the African varieties, albeit with less radical speciation.  American Cichlids are known to be the first fish species to populate the freshwater basin in Central America.  South American cichlids were the dominant variety throughout the Americas.  Being at the top has its advantages as the South American variety developed some distinct specializations, similar to their African counterparts.  One notable example is the disk-shaped body of the aptly named Discus and the popular Angelfish.

South America is home to the Amazon River, which, at just over 4,000 miles long is the world’s second longest river stretching from the Andes Mountains in Peru all the way down into the Atlantic Ocean.  That much water is naturally going to attract some fish, which explains why over 2,000 species call the Amazon their home.  In fact, 20% of the world’s freshwater is contained within the Amazon, making it the obvious choice for freshwater fish species.  You may have read about the importance of substrates in freshwater aquariums and you can thank the Amazon for that trend.  The river has a muddy sand mixture that allows for a wide variety of plants to grow, providing a wealth of food for fish.

The fish can be subdivided into three main groups:  Dwarf American Cichlids, Large American Cichlids, and a group that does not fit into either of the two previous groups (mostly for hybrids, but also for the previously mentioned Discus and Angelfish).  Let’s take a closer look at each group.

Most of the smaller cichlids are found in the dwarf group.  Quite a few never get any larger than 4 inches (or 10cm) and could have plenty of room in a 20-gallon tank.  Included in this group are colorful varieties such as the American Dwarf Cichlid or the shy New World Dwarf Cichlid.  Both of these examples lean more to the delicate side of things so they would probably not be ideal for a beginner aquarium owner.

On the opposite end of the spectrum you’ll find the large American cichlids.  Their larger relatives require more space, which is why experts suggest a 75-gallon tank minimum.  Surprisingly to some not familiar with cichlids, these can actually develop something of a personality and have even been known to develop a bond with their owners.  Colorful markings and great temperaments make them an aquarium favorite. 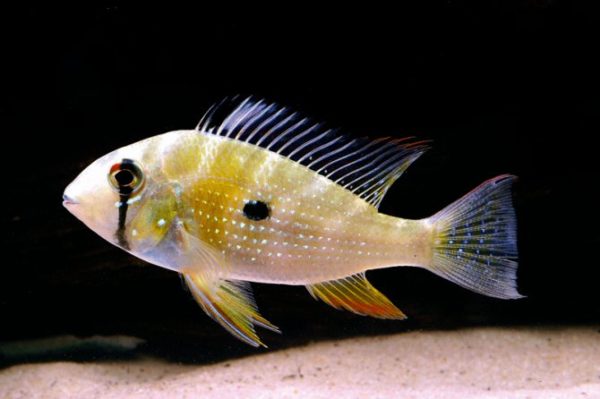 The last group, which contains hybrid cichlids, discus, and angelfish, is hard to name since the members are so varied.  Some notable hybrids include the Flowerhorn and the Blood Parrot Cichlid, both of which have interesting body shapes and majestic coloring.  The Angelfish has translucent fins that look like angel wings and the Discus has a large, round, disc-shaped body, hence the names of these two.  You can see why classifying these varied fish is no easy task, which explains why it is a group without a proper name.

In closing, make sure you perform all the basic fish care tasks for your South American Cichlids.  This includes routine water change outs, regular feedings and a strict adherence to a regulated temperature.  As far as food goes, most cichlids are carnivorous, consuming smaller fish, insects, and worms in their natural environment.  For your tank, consider any of those options, but for the less adventurous owner, they are also fine with traditional flakes or pellets.  Remember to take care of your South American Cichlid and they will provide you with years of entertainment and companionship.