The world of aquariums is a fascinating and complex passion. There are practically no limits regarding the aquarium’s variety, dimensions, arrangement possibilities, and population. For many novice aquarists, the mere fact of keeping the plants alive is already a victory, but for an aquascaper it is important to realize that random grouping of plants and the allowance of free growth doesn’t necessary constitute an aesthetic-looking aquarium. For an aquarium that is natural, beautiful, and realistic, should follow a particular style. 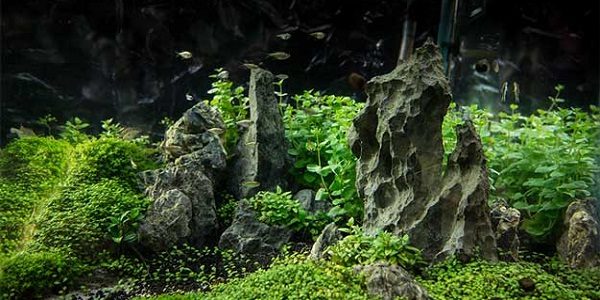 The Dutch style of planting comes directly from the popular custom in Holland to create floral and plant arrangements. The idea is to arrange the plants in large beds, rows, and terraces to create a powerful contrast of colors and shapes that are visually appealing. A large aquarium is preferred to provide enough space to introduce an abundant quantity of varied species without the use of elements such as stones or wood. It is essential the aquarium be fully planted and to have a carpet in the central area. The plants should also be regularly trimmed to maintain a neat content.

Nature style was introduced and made popular by Takashi Amano. This style is representative ofa beautiful, natural landscape similar to when walking in nature. It is strongly influenced by the oriental style Japanese gardens.The final result should resemble the sensation of a peaceful, harmonic ecosystem. It should look as if nature created the aquascape, which could be obtained only by a major contribution of the aquascaper to maintain the aquarium. Plants need regular trimming and great care, but in such a way that the intervention of man is not visible. The quality control and frequent partial changes of the water are compulsory. This style often employs stones and wood in order to create aquascapes as similar to nature as possible. This style is very flexible in regards to the size of the tank and the number of species planted.

This style is the most popular among aquascapers and was also made popular by Takashi Amano. In Japanese, Iwagumi means “rock formation,” a name appropriate for this style sincean odd number of rocks should always be used to ensure harmony to the aquascape. Usually there are three rocks: Oyaishi, the largest one, Soeishi, and Fukuishi. The placement of the rocks follows the “golden triangle rule,”to equally partition the layout. Placing rocks according to the “golden ratio” in these segments will allow the viewer to see the focal point and will create a sense of harmony, simplicity, and continuity. In order to create an Iwagumi aquascape it is best to have at least seven rocks of different sizes and of various shapes, texture, and details (Shou, Seiryu-seki or Maten are the most common rocks used in Iwagumi aquascaping). Due to the simple layout, create a sensation of peacefulness and calmness by using only a few plants and small fish.. 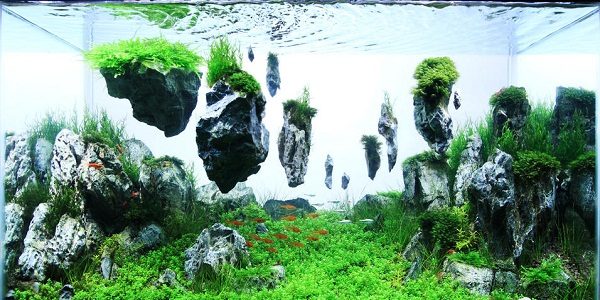 The Jungle style allows a great deal of freedom when it comes to aquascaping. The flexibility of the style resides in the fact the plants are allowed to grow until they reach the surface with the use of different species mingled together and utilizing any quantity of rocks or wood. The final result appears as part of an unexplored tropical forest, without the intervention of man. Carpet plants can be used, but in most of the cases, it is aesthetically pleasing if there are certain open areas.

This style is different from those presented above because its purpose is to portray a specific location or a habitat. For this reason, biotope aquariums can be used for studying natural settings. All fish, plants, hardscapes, and even the water must be exactly as in the location it renders, including only organisms and parts that coexist in that biotope. Since it requires a detailed design, it is best to make these arrangements in larger aquariums.

Even if this style is not very popular anymore, it can still create beautiful aquascapes. It is a combination of the Nature and Dutch styles and Zen gardens. Depth and high terraces are the main characteristics of the Taiwanese aquariums. It has to create an impression of a living landscape, this being the entire purpose of the present style. The final element is to add small figurines together with other objects or structures.

First introduced by Diana Walstad, this style is a natural aquarium containing a substrate underlayer of soil because without it plants don’t grow as they would in a natural environment. The main idea is to create an ecosystem that is as natural as possible with the visual aspect being secondary. Among the goals of this method are good plant growth and very little to no algae. Water doesn’t have to be changed very often, the aquariums areodor free, and injected CO2 or biofilters are not required.

Rock arrangements are the center of this style along with corals, coralline algae, or marine invertebrates. Saltwater aquariums can either be setup as a fish only, reef only, or fish and reef tank.  Your maintenance will be determined by the size of your tank.  Though all types of aquariums are relative costly, the Saltwater aquarium is the most expensive considering the species of fish, the amount of fish and/or reef, and the maintenance and equipment to support this aquarium.